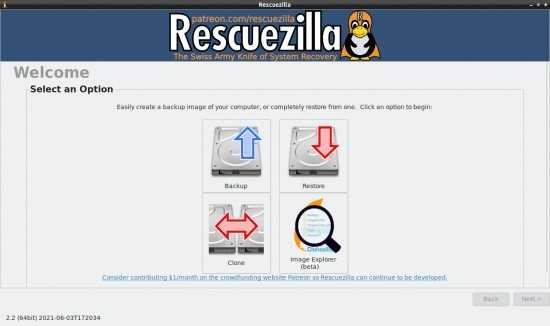 Rescuezilla is an easy-to-use disk imaging application that’s fully compatible with Clonezilla — the industry-standard trusted by tens of millions. Yes, Rescuezilla is the Clonezilla GUI (graphical user interface) that you might have been looking for.

Disk imaging makes a backup of your computer’s hard drive which is managed as files stored on an external hard drive. If your hard drive fails, you can restore your disk image and within a few minutes all your documents and settings will be restored to the exact same state they were in when the last snapshot was taken.

Rescuezilla lets you perform backup, restore and recovery actions, even if you aren’t able to boot into your regular operating system. It does not matter if you use Windows, Mac or Linux. It doesn’t matter if you can’t even login. Download and write the ISO to a USB stick, and reboot your machine. Your computer will load a complete mini operating system with a point-and-click user interface into your computer’s memory without writing any information to your hard drive.

Rescuezilla is a fork of Redo Backup and Recovery (now called Redo Rescue) after it had been abandoned for 7 years.

Rescuezilla has the most features coupled with the simplest, most user-friendly interface: