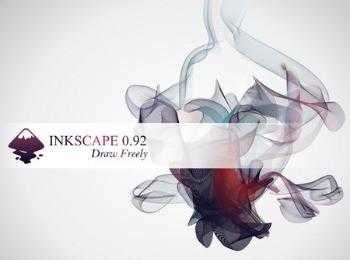 Providing advanced editing features, Inkscape Portable is a serious competitor on the vector graphics sector and a viable alternative to more complex software suites, such as Illustrator or CorelDraw. The professional drawing tools allow you to create complex objects, while the set of filters helps you take graphic design to a whole new level. Designed with ease of use in mind, the interface is well organized and fairly intuitive, offering fast access to all the options. The program is compatible with multiple file types, including JPEG, PNG, TIFF, EPS and vector-based formats.

It comes with a powerful set of tools for drawing and editing graphic objects, including markers, gradients, shapes, paths, clones, alpha blending and more, but it also allows freehand drawing. With just a few clicks, you can move and scale objects, create object groups and edit multiple items.

Direct XML editing, document mapping, screen pixel manipulation, node editing, bitmap tracing are some of the features worth mentioning. It provides layer support and allows you to perform complex path operations, as well as apply and edit path effects. Additionally, the application comes with text editing tools, such as the SVG font editor, glyphs and multilingual spell checking.

One of its advantages is the wide range of available filters and extensions, which allows users to build more unusual graphics. From color filters, bluring, distort and different materials to morphology filters and non realistic 3D shaders, all are designed to help you enlarge the design possibilities and unleash your creativity.

Whether you want to create a simple icon for your desktop or plan on designing complex marketing materials, Inkscape includes all the instruments you need. It features similar capabilities to some of its well-known competitors, which makes it a great tool for every graphic designer out there.

Exciting New Features
Mesh gradients are a powerful tool enabling artists to more easily create photo-realistic drawings – a feature we would love to see made part of the W3C’s Scalable Vector Graphics (SVG) standard; if you find this feature as cool as we do, please request that your favorite web browser adopts support for it too!

Inkscape Portable works closely with the SVG standards committee, and thanks to our many generous donors, the Inkscape project sponsors an engineering representative to attend SVG working group meetings over the past few years. A welcome outcome of this participation is the improvement and addition of over a dozen SVG and CSS properties.

Live Path Effects are proving to be a vibrant ecosystem in the Inkscape project, and many innovative new ideas have been percolating over the past couple years since our last release. Spiro Live, BSpline, and Roughen essentially provide new drawing modes. The Simplify LPE cleans up vector elements non-destructively by smoothing paths, shapes, groups, clips, and masks.

Perspective/Envelope and Lattice Deformation 2 enable artists to interactively deform/transform drawing elements. Other new features enable interactive mirroring, interactive rotation of copies along an arc or circle, and dozens of other additions and enhancements.
Inkscape 1.1 is the latest major Inkscape release that brings you many fresh new features and new functionality.

Improvements that apply to all extensions: