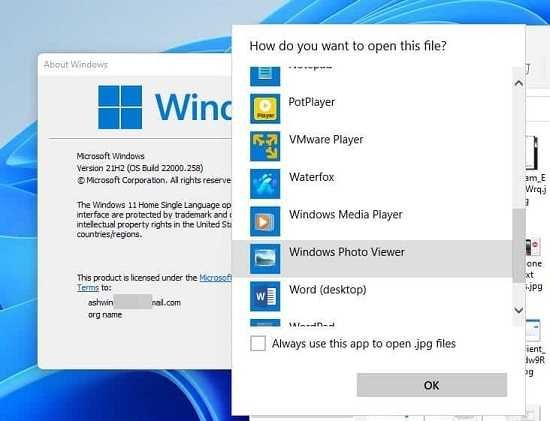 Windows 11 brings a slew of new features, some of which have not been well received among users. If you look at the previous iteration, it also had some unwelcome changes such as the Photos app, which replaced the Windows Photo Viewer.

The Photos App isn’t bad at all, in fact it comes with a built-in Video Editor, and I think it is quite useful. The main reason why people do not like the Photos app is due to its performance. It is rather sluggish to open, it takes an extra second or two to load, even when you are trying to view images which are just a few KB in size. The interface may appear slightly confusing, if you are coming over from Photo Viewer.

Well, if you like the simplicity of the legacy application, you are probably going to be disappointed to hear that Windows 11 does not include Photo Viewer by default. You can verify this by selecting any image and right-clicking on it. Select the “Open With” menu item and click on “Choose Another App”. Click the “More Apps” option and scroll down the list, it will not display Photo Viewer among the choices, because it is hidden by the operating system.

The good news is that you can easily get the program back in Windows 10 and Windows 11 by using the registry file that you can download below.