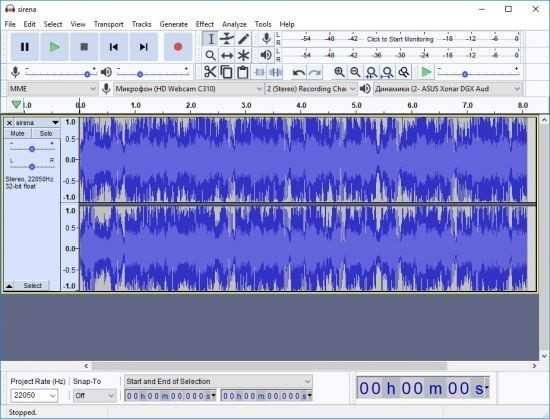 Audacity Portable is a free, easy-to-use and multilingual audio editor and recorder for Windows, Mac OS X, GNU/Linux and other operating systems. You can record sounds, play sounds, import and export WAV, AIFF, AAC, MP4, Ogg Vorbis, and MP3 files, and more. Use it to edit your sounds using Cut, Copy and Paste (with unlimited Undo), mix tracks together, apply effects to your recordings, change the speed or pitch of a recording, and really much more. Audacity enables FLAC support. The program also has a built-in amplitude-envelope editor, a customizable spectrogram mode, and a frequency-analysis window for audio-analysis applications. Built-in effects include Bass Boost, Wahwah, and Noise Removal, and it also supports VST plug-in effects.
Audacity is without a doubt one of the best and easiest digital audio editors on the market and it will meet any requirement at 100% no matter if it is home or professional audio edition.

What’s NEW:
Audacity 3.0.0 is a major update on our previous Audacity 2.4.2. We’ve changed the format in which we save Audacity projects! Previously we saved projects as a sometimes large number of small files, with an ‘.aup’ file to coordinate the lot. This way of doing things is sometimes called ‘pile of files’ storage.

The problem, which happened all too often, was that data files and .aup file parted ways. Users quite reasonably expected the .aup file to contain the entire project. Well, the new .aup3 file does contain the data as well. The technical detail is that we are using an open source database, SQLite3, to store everything in one .aup3 file. That all happens ‘behind the scenes’. SQLite3 is open source, and it is a delight to work with. Nevertheless, this was a huge change, and we decided it was too risky to include many other changes we wanted to make at the same time – so 3.0.0 is almost entirely about this big format change.

Working with .aup3 projects editing audio should on most machines be a little faster than before, because there are fewer files being worked on. Finishing and closing a project at the end of working can be quite a lot slower, since there is more to do when a project is closed. We think the trade offs are worth it.

Label Sounds & Noise Gate
We did have time to improve our ‘Noise Gate’ effect and add a new analyzer, ‘Label Sounds’, that can label sounds and silences. We also made a few small tweaks elsewhere. You can now import and export macros, and there are a couple of new commands for using the last used tool or last used analyzer that you can give shortcuts to.

Bugs fixed
We also fixed over 160 bugs that had been accumulating over the years. This is quite a staggering amount of work. The majority of these bugs were minor problems, easily worked around. Some though were really juicy high priority bugs that would have mattered a lot to the people affected by them. We’re really glad to have these bugs fixed now.

We hope you enjoy using Audacity 3 as much as we enjoyed putting it together.

This is a patch release for Audacity 3.2. It enables use of VST2 as realtime effects and fixes some bugs.