Ventoy is a small program that allows you to quickly create bootable USB sticks from ISO files. Reinstalling your operating system from a bootable USB has the advantage of eliminating the requirement to format the drive.Instead, simply plug the USB into the designated port and restart your computer.

Ventoy uses ISO images to produce bootable USB devices. At first glance, that sounds a lot like what well-known programs like Rufus do, but once you discover that it simply saves ISO pictures to the drive rather than extracting them, it gets intriguing.

Even better, after Ventoy has prepared the USB device, you can place various ISO images on it, allowing you to boot into different Linux systems or install different versions of Windows from a single USB device.

Users can save modifications made to a Live system with persistence functionality. Select Linux distributions are supported by Ventoy.
The procedure is a little more involved because it requires editing a JSON file to establish a persistence array. Instructions on how to do so can be found in the documentation on the Ventoy website.

While there are numerous tools that create bootable USB, most of them rely on the OS’s kernel which needs to access the hardware storage media for the source. The idea behind the program is different and entails that the information is saved to runtime memory before booting.

Therefore, the OS can determine that the data is booted from a virtual disk, find the source medium needed for the operation and continue to boot without having to create the standard hook, as with the classic booting.

It is worth mentioning that the tool allows you to add as many ISO files as you want, case in which, you are welcomed by a menu following the boot. The program supports ISO files over 4 GB as well native UEFI and Legacy BIOS and it works with dozens of operating systems, as the developer states there have been more than 900 files tested.

To prepare a bootable USB flash drive you can use tools like FlashBoot, Rufus or similar solutions. A new alternative in this sense is called Ventoy, and embraces a completely different approach and certainly not less attractive than the tools mentioned above.

Unlike competing software, Ventoy does not extract OS files from an ISO image, but allows you to copy the original ISO to the USB stick you are preparing. In case of multiple ISOs, the program provides a boot menu from which you can choose to boot one of the systems on the disk.

Ventoy is also free source, simple to use, and quick, with compatibility for legacy (BIOS) and UEFI booting, as well as ISO images larger than 4GB.

Ventoy LiveCD is only for Windows users, and only needed when “Ventoy2Disk.exe” fails. 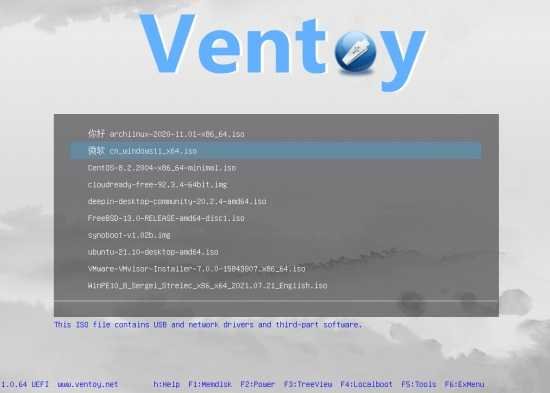