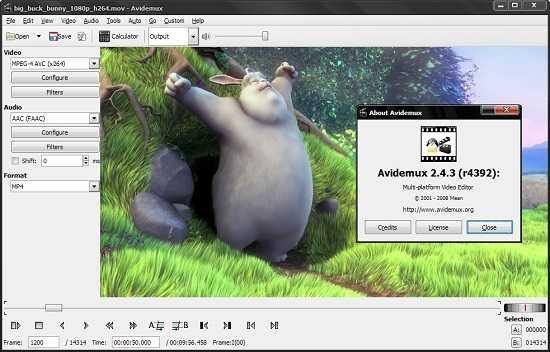 Imagine an application which does everything VirtualDub can do, but runs on various platforms, supports a lot of containers, comes with all Codecs you need built-in and doesn´t use the nasty VfW interface. That applications is Avidemux! And now the “official” version: Avidemux is a free video editor designed for simple cutting, filtering and encoding tasks. It´s graphical user interface looks pretty similar to VirtualDub and most features known from VirtualDub are available too. Avidemux natively supports a great number of file types, such as AVI, MPEG, VOB, TS, MP4, ASF, OGM, MKV and FLV. At the same time Avidemux natively supports a wide range of Video/Audio formats, including MPEG-1, MPEG-2, MPEG-4 ASP, H.264/AVC, DV, HuffYUV, MP3, AAC, AC-3 and Vorbis. Tasks can be automated using projects, job queue and powerful scripting capabilities. Video-DVD or (S)VCD compliant streams can be created with easy-to-use “Auto” wizards. Multi-threading is supported!

The part of video preceding the presentation time of the first frame is now excluded from created segment, making all videos appear as if they “start at zero”.
When saving video, the frame matching the B marker is now excluded from the exported range. Therefore, if the B marker is set to the last frame of the video, it needs to be reset to the full duration for the last frame to be included into the output.
Loading Matroska files with HEVC video tracks takes longer as slice headers are decoded to detect the frame type.

HDR video can be converted to SDR with tone mapping using a variety of methods.
FFV1 encoder is back (it was available in Avidemux 2.5.x).
TrueHD audio tracks can be decoded and are supported for Matroska containers.
Decoding support for WMA9 Lossless codec.
Filter previews have got a unified method to quickly compare filtered and unfiltered inputs via the “Peek Original” button.
Blend and motion interpolation options added to “Resample FPS” filter.
Mark cut points (segment boundaries) on the navigation slider. New buttons and shortcuts are provided to jump to these cut points.
In the Video Filter Manager, active filters can be temporarily disabled.
Preference added to load sequentially named pictures in reverse order, allowing to reverse video by exporting selection as JPEG images and loading the first one.
During playback navigation is possible via keys or by dragging the navigation slider.
Other Enhancements
“Resample FPS” and “Change FPS” filters can handle up to 1000 fps.
“Crop” filter’s preview has got a translucent green masking.
“Crop” filter’s Auto Crop function can achieve perfect crops (if the selected frame is not too dark).
The maximum output resolution of the “Resize” filter has been increased to 8192×8192
The “Resize” filter has got a nearest neighbour scaling option.
Improved HiDPI scaling in previews.
x264 video encoder plugin now allows to specify color properties.
Maximized window state, widget visibility and toolbar position are preserved after application restart.
Timestamps in format 00:00:00.000 like copied to clipboard by pressing CTRL+SHIFT+C can be pasted into the “Go to Time” dialog using CTRL+V.
PulseAudioSimple audio device has been replaced with full PulseAudio, making an in-application volume control available (Linux only).
ALSA audio device plugin has been modified to use soft volume, providing application-specific volume control which works with every ALSA device.
In the Video Filter Manager, navigation by keyboard has been enhanced.
The VU meter (“Audio Metre”) has been redesigned.

Bundled FFmpeg libraries have been updated to 4.4.1 release.